Building the future of the institutional investment industry.

How can investors manage the uncertain transition to net zero?

If Charles Dickens was alive today, he would work in sustainable finance: Addressing the duality of the times

If Charles Dickens was alive today, he would work in sustainable finance: Addressing the duality of the times

This excerpt from Charles Dickens’ A Tale of Two Cities is one of the most famous opening lines of any book and sums up succinctly the concept of duality. And duality is something that Mr Dickens had a great deal of experience in, given his day job as a social critic of the class system and industrial revolution alongside his fame and fortune as an international author and celebrity.

As the article title suggests, if Dickens was alive today, he might well work in sustainable finance. And this playful take on what he might find is attempting to highlight a more serious issue that those in this arena struggle to get to grips with – dualities. I would like to explore and highlight some of these dualities as a way of helping myself and hopefully others keep our heads above the water of complexity in an ever-changing and accelerating world.

From his house in the UK Dickens would have seen the scorched woods and fields in August, followed by a more typical rainy and cold Autumn. Taking the positives first, climate risk as an actionable science is maturing at an incredible rate. Access to data, the development of models, and the work done by academics, governments and NGOs, is starting to create knowledge and tools and putting them in the hands of companies that can direct capital.

But is it happening quickly enough…?

According to the Intergovernmental Panel on Climate Change (IPCC) it isn’t and most of us would have finished this last summer more aware and worried about physical climate risk than the start of the year.

Investor attitudes to ESG and climate risk have been changing for some time as illustrated by this chart from Deloitte: 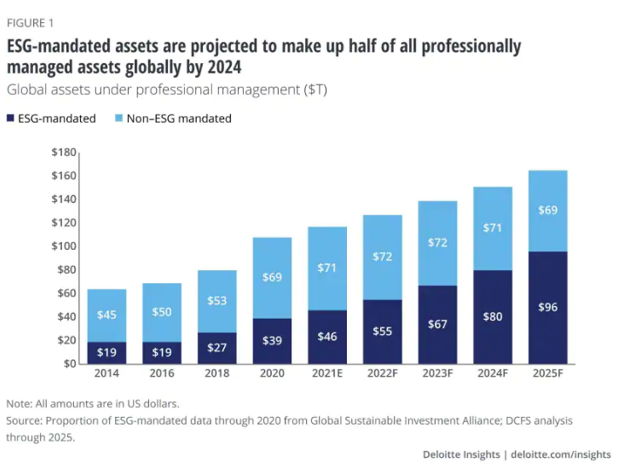 But what would Dickens make of these?

I think Dickens in his wisdom would see this as a sign that things are starting to change and rising resistance a natural reaction, however the increasing politicisation of ESG and climate is unlikely to help in the short run.

I think Dickens may have faced imposter syndrome on some days. Climate risk is so broad and ultimately rooted in science and at times may have felt better suited to his contemporaries Darwin and Babbage. The space is evolving and becoming more sophisticated and impactful, but the complexity can be a barrier to mere mortals and certainly the majority of actors who direct capital.

Simplification is sorely needed if climate risk is to scale and become ubiquitous alongside all traditional investment capabilities.

A big argument against this will be the same for any complex science, namely that the side effects of reductionism lead to a dilution on impact and obfuscation of the detail or at worst leads to bias. An example would be any form of rating that hides the underlying detail or relies on subjectivity, namely black box rating systems and models.

However the industry cannot rely on discussions and face to face meetings to drive progress alone. Some scale and simplification is needed to drive meaningful impact across the industry. Does the industry need Babbage's Difference Engine number 2 - something that can simplify and scale, dealing with the easy things so bright minds can focus on the bigger challenges and the important discussions?

Dickens produced a prodigious amount of work over the years. He did this by all accounts by being very organised and considered in how he used his time. I imagine he would keep an up-to-date to do list and, considering the dualities of this imaginary sustainable finance role, I can picture the following tasks / reminders on his notepad:

1.      Spend majority of time with people who really know what they are talking about (e.g. Babbage and Darwin).

4.     Perfection is the barrier to progress.

5.    Find a way to save time through technology so I can spend more time on 1.

Photo by Andre Taissin on Unsplash